Ladies and Gentlemen, Katie Johnson Has Left the Building 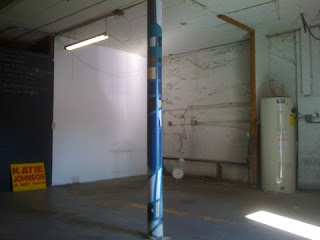 Oh my, after 12 years of working, sweating, dying, painting, pressing, sewing, printing, batiking, packing, laughing, crying and focusing in this space... I have moved out of my studio. This empty, industrial, back alley 700 sq. foot windowless room housed Hartware's dye and print shop since 2000. This space served me well and I witnessed many changes in the downtown blocks which surround my work shop in those years. But I'm glad to be gone. I've moved my studio back to my dwelling and into the yurt that now sits near my house. This move feels momentous and delightful and unbelievable to me. I feel a fresh breeze blowing through all of the habits and patterns and ruts that working within those walls at 711 Main St. engendered. I suppose I could sit down and calculate just exactly how many minutes and gas I will save by not driving into my studio 5 miles round trip every day. I suppose I could do that, or I could walk to the lake.....
It is time to be quiet and wait. Something new is being born. I don't know yet what it is.
Posted by Hartware at 3:31 PM No comments: 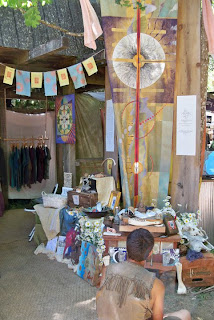 At the Oregon Country Fair I chose an experiment instead of my normal routine of "work myself to the bone with no sleep and make as much clothing as possible" pattern. I chose to go on a financial fast. A fast similar to a dietary experience of abstaining from the ingestion of certain foods or even any food at all. I chose to consciously make less money by not adding new inventory and to witness the internal processes that arose from that choice.

I am so glad that I did this.

Let me say that one more time...I am so very, very glad that I did this. I had a very powerful time at the OCF this year. By stepping back from my personal treadmill I saw how addictive and compulsive my work ethic has been. In the act of choosing financial abstinence I put myself on a firm platform of trust. I knew that I would survive the financial strain of less money. I decided that my sense of security does not derive from money and that in fact, money is the source of quite a bit of my anxiety. With this simple act I began to assess all of my resources and the largest resource of all is my community. Ultimately, that is all that money is anyway. It is an abstract representation of our energy that we pass between ourselves in order to quantify our efforts. Money allows us to harbor illusions of independence. But those illusions are tearing at our consciousness and resulting in an increasingly alienated culture. We have forgotten that we created legal tender to simplify our bartering system. Now, people work just for money and completely forget that it is the planet's natural resources that are what is required for our survival. Thus we routinely exploit our abundant water and forests and mountains and the result is that we ultimately damage our own habitat.

Creating the Altar Net for the Oregon Country Fair helped me remember who I am and what I am doing. It was a fantastic stream of conversations with wonderful festival goers and family and friends and new ideas. It has been a recognition that we reside within a net, an intricate interwoven web that supports us. This network of interconnection cannot be severed no matter how hard we try. We must breath the same air and allow the same water to pass through our bodies as every other inhabitant of this planet. Money serves us when we remember what a handy tool it can be. When we exchange it and it connects us to one another. It really only works when it is moving between hands and when it represents something. As our financial institutions crumble and Wall Street becomes a farce perhaps everyone will finally cry out "the emperor has no clothes"! 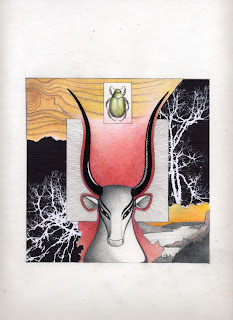 This winter I have been building altars. It began with a small altar in my studio before I went to work there. That was the result of my ruminations from my last blog post in which I embraced the union of my "work" and my "spirit". The first altars were clearly devoted to the earth element. I was and could say that I still am very interested in getting my feet on the ground. So much energy is devoted to planning and decisions and visions that I yearn to see tangible results of all that ruminating. That is what I enter the studio for and pray to birth abundance. So, the altars seeped into my art. Here is the first completed image titled "Earth".
Posted by Hartware at 10:00 AM 1 comment:

Standing in front of the white, blank, sheet....of paper or fabric or wall. A coming back to that blank page. What? Why? How do I lift my pen or brush? Feel the urge. Eternally the question, what next? What has come before? What shall be different? What shall remain? What is unfinished? Should I bother? Is it worthless? Is it brilliant? This moment thumps itself over and over using me as it's drum. Again, I find myself here. Even my computer freaks out periodically and offers me only a white screen. Does it conspire with all the other blank sheets that wait, expectant to receive the image, the message, the word? What's the word on the street?
Today...ripple. The thought comes to just do it. Just put out there the things I love. Feel the love sister! What do I love? What is worth remembering and reforming into color and pattern?
OK
Mushroom gills, compost, ripples, gods, frailty, webs, potato bugs, roots, growth rings, usnea, ease, puffs of smoke, fat trees, traffic jams on epic bridges, dry firewood, empty highways in vast land, persian carpets, children dancing.
Thankyou Life
Posted by Hartware at 1:02 PM No comments: 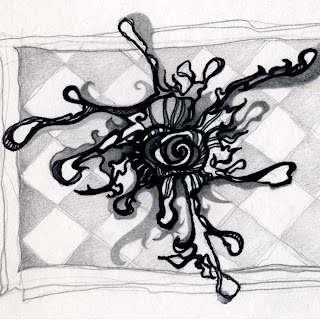 Posted by Hartware at 6:28 PM No comments: 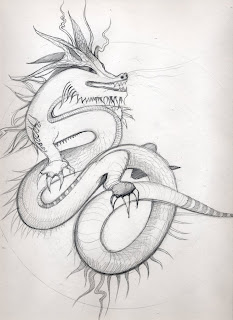 Posted by Hartware at 6:17 PM No comments:

"Work with the hands is the apprenticeship of honesty. May the work of your hands be a sign of gratitude and reverence to the human condition".
Gandhi
"The truly efficient laborer will not crowd his day with work, but will saunter to his task, surrounded by a wide halo of ease and leisure, and then do but what he loves best. He is anxious only about the fruitful kernels of time."
-Henry David Thoreau